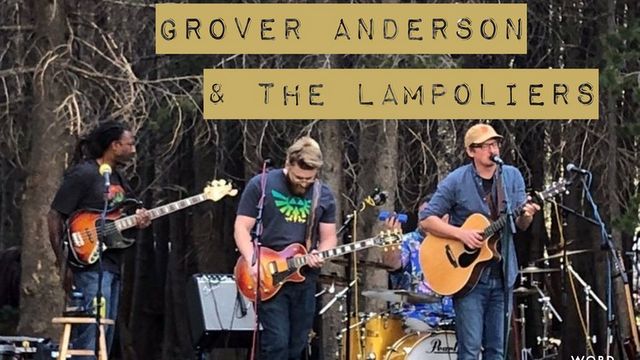 Grover Anderson and the Lampoliers -$10 Cover

For years, Grover Anderson wrestled with his commitment to holding a day job. Always eager to pursue a career as a singer-songwriter, the desire to start and support a family landed one all-important notch higher on life’s priority list. For the last six years he’s been making both work—teaching high school English & drama in his small mountain town, building a devout local following, and touring the US in the summer. He released four albums and played in 23 states, yet still he wondered if he’d given short shrift to a dream. Then 2020 happened, and as he witnessed the hardships endured by career performers, Grover had never felt more fortunate to hold a secondary gig.

At the beginning of last year, Grover and his bandmate Josh Certo began mapping out songs for what was to be Grover’s fifth album. The intent was to use the recordings as a foundation on which their band, Grover Anderson & the Lampoliers, could collaborate through a busy year of gigs and rehearsals. When lockdown began, their project quickly changed directions—Grover, Josh, Marshall Henry, and Anthony Delaney recorded their parts in home studios, sharing tracks virtually to create a fundamentally different album.

All the Lies That I Have Told is a collection of small town stories. Written around a high-country campfire, in a Texas Uber, and amidst Wikipedia deep dives, the songs dig a little deeper than traditional rural clichés. “From a Golden State” is a diary entry from a metropolitan teen forced to move to a place where everyone already knows your story.